We had a great time meeting everybody at NAHBS 2015, and we learned so much. Even got to ride snow-covered trails at Cherokee Park and underground trails at the Louisville Mega Cavern. 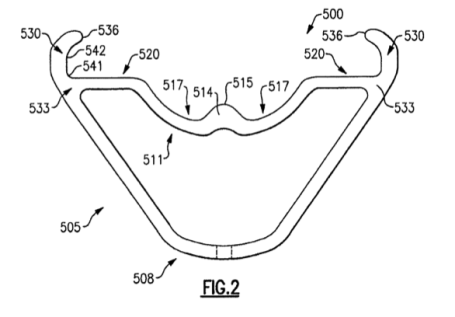 Compared to the current design of the Iron Cross, from notubes.com, the differences are clear:

The central hump 514, as shown in FIG. 2, does not appear in any of the current offerings on NoTubes.com. The hump 514 increases the strength and stiffness of the rim and helps with tubeless setup, for example:

It can be further observed in FIG. 2 that the troughs 517 on opposite axial sides of the hump 514 effectively form two channels. When a tire is initially mounted on the rim, each of the tire beads will sit in a respective trough region 517. Not only do the hump and troughs serve to keep the tire beads separated and confined prior to and during inflation, the separate channels created by the troughs make it easier to trap air and thus easier to inflate the tire particularly in the case of manual pumping. The hump and troughs also keep the tire spread apart and allow for the valve stem (not shown) to inject the air directly into the center of the tire, easing the inflation process.