Conventional wisdom in the belt drive arena tells us that belt drive is only for single speed setups, and an internally geared hub or a gearbox is needed to change gear ratios.

Not so according to Trek. Trek is pursing a US patent application that shows a hardtail mountain bike with both belt drive and a rear derailleur. In March of 2012, Trek was issued a US design patent drawn to the chainring for this implementation. 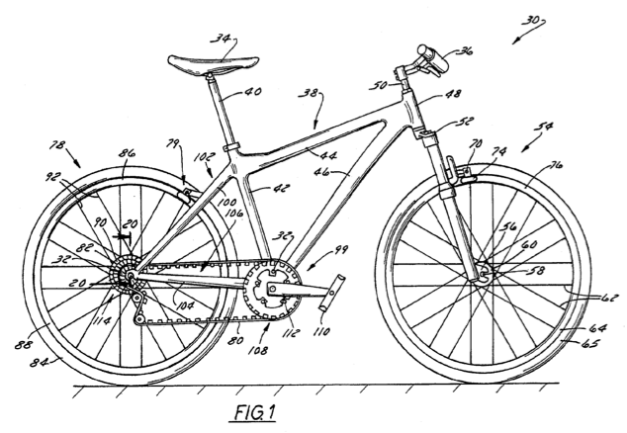 “One or both of the crankset and wheel hub cogs can include more than one cog having different circumferential sizes so as to alter the mechanical advantage provided between the pedals and the driven hub. … It is envisioned that, when provided in a multiple geared format, bicycle 30 be equipped with a front and/or a rear derailleur assembly to facilitate the manual lateral manipulation of the flexible drive member 80 in effectuating shifting of the gearing arrangement of bicycle 30 such that flexible drive member 80 cooperate with one of cogs 120, 200, or 300 as desired.”

In other words, Trek envisions belt-driven bikes to have both front and rear derailleurs.

In the cross-section of the cassette, you can see that the belt 80 is engaged in the largest cog and moveable to the right as indicated by arrow 434.

And, here’s a better look at the design of the cogs: 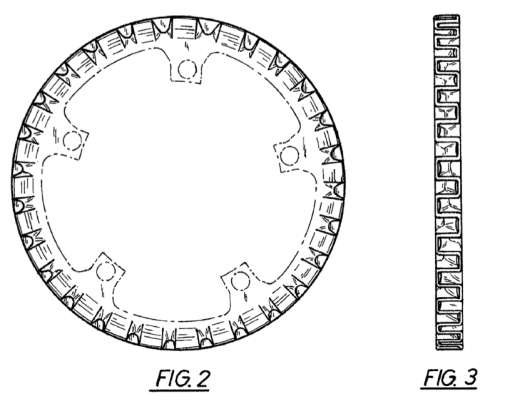 Looks like belt drive may be finding more applications soon.